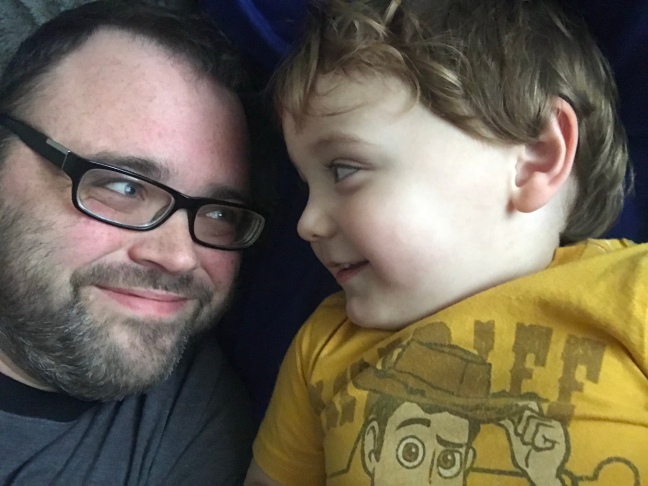 If you are a dad and you’re reading this….happy Father’s Day.

It’s kind of funny how Father’s Day works. In a perfect word, it is a day a dad can grill out with his dad while his kids run around outside. A family event. Life isn’t always like that though, is it? This day can be the best and happiest day or it can be full of pain…maybe it is somewhere in the middle.

I lost my dad over 10 years ago. He spent a few days on a ventilator before the doctor told me he was brain dead, and we needed to end life support. As the older, and since my dad wasn’t legally married…the decision was ultimately up to me. I stalled a day, to let family “say their goodbyes.” Really, I couldn’t make the decision right then and there.,

My wife (girlfriend at the time) was a rockstar. She helped me in ways that she will never understand, and helped me get to where I needed to be mentally to sign the paperwork to end his life.

I was able to be in the room with him when he took his last breath. I had my hand on his chest feeling for it. I had the doctor give him something to numb the pain, even though they said he was not feeling anything. There is something so…sobering and sad about watching a person take their lost breath.

I still, to this day, get hit with the feeling that I killed my dad. I know I didn’t. I know I made the right decision. For a long time I didn’t…and I beat myself up over it. I felt like I took our dad away from my brother David. He was, I think 12 at the time. That was one of the hardest things I’ve ever had to deal with in my life. Father’s Day sucked for a long time after that.

After my dad died, I got even closer to David. I think I needed him just as much as he needed me. David wasn’t my son, but I know I moved into the father figure spot with him, doing that helped me. It gave me a true purpose.

We were always hanging out…David, Ami, and I. Death sucks…but having a little brother that reminding me so much of my dad was what I needed.

My parents divorced when I was in second or third grade. I moved in with my dad when I was around 12 or 13. I always found it ironic that I got my dad back at the same age David lost him.

As time went on the pain of losing my dad changed. It never went away but I was able to cope with it. But Father’s Day…that day sucked. That is until 2016.

Ami bought pregnancy tests…and I didn’t know she bought them. I went to take the trash out, and right when I walked back in, she told me she has a positive pregnancy test. I was truly in shock. My reaction was something like “Oh my god (in an excited way) what do we do now?”

I was questioning literally what we should do in that moment, not like, what do we do now because we are screwed. I was thinking, do we find an urgent care to go confirm, do we need to have a pediatrician involved? I really was clueless.

It was literally among the top moments of my life. The others were Alex being born and getting married, if you are curious.

We were both so excited. I was pumped because Ami would finally go to a KFC buffet with me. Things were perfect…until August.

I literally was about a day away from dying, or being in ICU, a doctor said when Ami took me to the emergency room. I was a major infection in my foot and I was going septic. The doctor told me my body was in the process of shutting down when I got to the ER. I spent a week in the hospital and lost a toe.

The day after I got out of the hospital, we were going to hear our baby’s heartbeat for the first time. There was one problem with that, one of the antibiotics I was on made me throw up about every 30 minutes for about 15 hours straight. I am not exaggerating. I was worried about missing that appointing because I couldn’t stop from puking. I felt like crap…until I heard that heartbeat. We both cried. We cried so hard.

I healed and months went by. On February 28, 2016, Ami and I went to get coffee and milkshakes at a little shop in Terre Haute. As we walked in, her water broke. Her first words? You can still get your coffee. Ummm…no? We had the go back in my truck, we were ready for the hospital…we went straight there.

Alexander James Essex was born on February, 29. A Leap Day baby. That is the day my life truly changed. Seeing that kid, letting him hold my finger while the nurses cleaned him up, it was unbelievable.

When we hit Father’s Day that year, my sadness turned to bittersweet happiness. My dad was gone, but here I am…someone’s dad. I never thought that would be. I think a lot of people still feel like kids until they are someone’s parent.

THE LOVE, UNKNOWN, AND TIREDNESS

When you tell people you are about to become a parent, you get so many bits of advice and warnings. ‘Say goodbye to sleep’ and ‘Say goodbye to your social life.’ There were also tons of tips about diapers. We will go through a lot of diapers. We started prebuying those base boys while Ami was pregnant. We didn’t need to buy diapers until Alex was like, six-months-old.

All of those warnings are true, but what nobody warned me about was the guilt of being a dad. That, my friends, is the hard part. You get use to no sleep and you don’t mind giving up a lot of the things you did before. The guilt though. I’m talking about dumb guilt. Not you are a bad parent guilt.

It starts off with something like feeling bad that you didn’t hear your baby cry, because you slept through it…or the iPad we were using for a baby monitor got unplugged and it died. That was the first time as a dad I truly felt bad. I beat myself for the entire day. It wasn’t something we’ve done before, and it wasn’t something that happened after. That day though, I felt like a really crappy parent.

As Alex got a little older, I would feel bad about things like putting him in time-out, or if I had a bad morning and got easily frustrated with something he did. I want to be clear, me getting easily frustrated is yelling…not hitting. It could have started with a bad night of sleep before or maybe something else was on my mind. I’ve lost sleep over that before.

You will feel bad about a lot of things as a dad…and guess what? Those things are normal to feel bad about, and it’s okay. You are probably doing just fine. No dad is perfect. If you are trying…it will come though, and your child will know.

But there’s the love and watching your child grow. If you are a dad…you know that is the single best thing about being a parent.

Alex is four. He’s recently started expanding what he wants to learn. His world has become more than choo choos and cars. It is exploring every hole, looking in any window (that we let him look in), and asking a million questions.

Never stop or discourage your kid from asking questions. Never. As a journalist by trade, I can tell you being curious is the single best thing any person can be. Let them ask questions…and then ask the same question again. And as much as a pain in the butt it can be, try your best to give them thoughtful answers. If you don’t know the answer, take them to the internet, where you might be able to find a video for them to watch.

Recently, Alex and I went to a local park…and there is an area where you can hear your echo. He wants to know what an echo is and how it happens. I understand how it happens…and you probably do too…but how do you explain that to a four-year-old? It is sound bouncing off the walls and coming back to your ears. “What do echos look like?” Because if it is bouncing, it must look like something. That WANT to know…I love that.

There is nothing more rewarding that watching the gears move in your child’s head…and then watch as he or she understands what you just taught them.

MY GOALS AND THE FUTURE

I have two goals as a dad. I want to make Alex feel about me how I felt about my dad. My dad was a safe place for me. If I wasn’t sure about something or I was scared…even as an adult, I could go to my dad. He would walk me through it…or if he couldn’t do that, we would talk about something else and it would make me feel tons better.

I know my dad wasn’t perfect, far from it. But he made me feel safe…and you can’t replace that.

My other goal? I want Alex to turn out like my brother, David. Growing up, David had a lot of cards stacked against him. He had his jerk moments growing up…and I’ve had to talk to him about the right time to make inappropriate jokes…but he is a great person. He did really well in school. Worked his way through college…and is working in a great job. David would drop what he is doing to help someone. If Alex turns out like that, I will feel incredibly lucky.

If Alex comes across this someday and I am not around anymore…the best piece of advice I could give him. Treat everyone with respect…and stay curious. Always ask questions.

To all of you dads. Father’s Day is your day. Enjoy your steak and hopefully you get the chance to sleep in. But never forget, you wouldn’t be you without your kids.