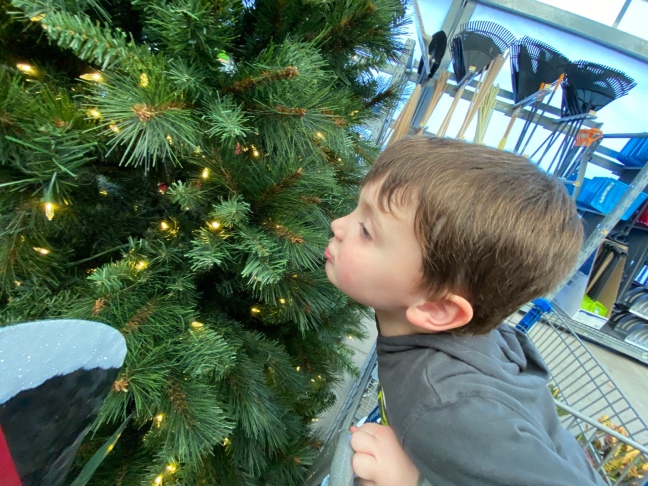 According to parents Chris and Ami Essex, Alex has had a long-time fear of Christmas trees.

The change of heart happened Sunday afternoon during a trip to the store to pick up a pumpkin.

“We stopped at Walmart in Paris (Illinois) after we picked Alex up from his grandmother’s house. Ami split off to look at the clearance area so Alex and I went to check out the Christmas trees,” Chris said. “I didn’t think he would want to get too close.”

“It started with a little touch. He wanted to feel it out with his finger tips. He ended up kissing one. I was shocked. He kissed it. Yes. I took a photo,” Chris said.

Ami said she was sad she missed it, but happy he is starting to accept tree.

“I did get to see him touch one a little later. But I didn’t get to see the first touch and kiss. I’m proud of him,” Ami said.

Alex – who previously loved Halloween has appeared to jump straight to Christmas.

“I want Santa to come. Santa coming tonight?” Alex asked. “Santa is going to bring me trains and Disney Cars.”

Just one week ago, Alex was terrified of Christmas trees during a trip to Lowe’s.

Chris and Ami say they plan to put their Christmas tree up in about a month.