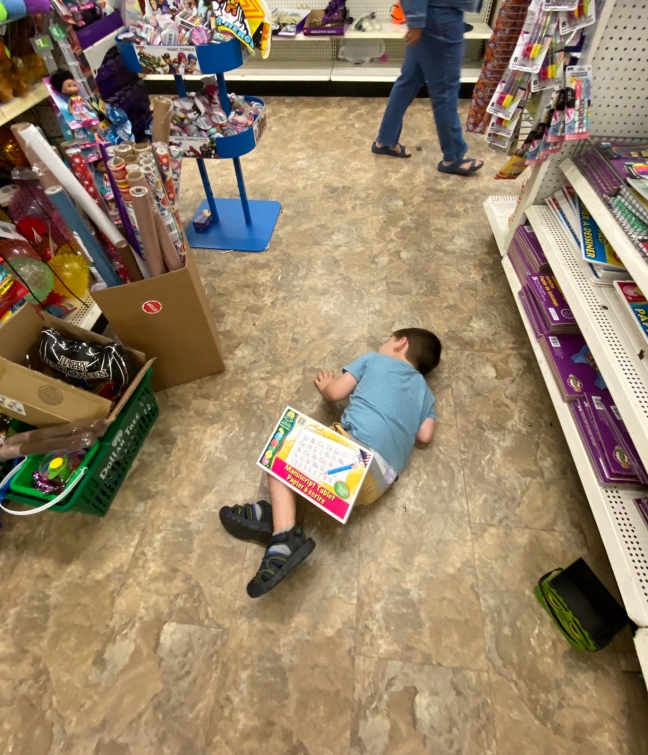 TERRE HAUTE, Ind. (FTN) – A local dad said he convinced his three-year-old son to attempt to go to sleep in the toy aisle of a Vigo County dollar store.

It happened just after 8:00 Saturday night on the city’s sound side.

Chris Essex told FTN he convinced his son, Alex, to lay down in the aisle, using an ABC workbook as a blanket, and try to sleep.

“So, we had a fun day. Went to get dinner…he went to the Bouncin Barn, a place full of bounce houses and toys, and then we stopped by Best Buy and Dollar Tree. By the time we got to the dollar store, it was past his 8:00 bedtime,” Chris said.

He told us he jokingly told his son it was time for bed, and he needed to lay down. So Alex did just that.

“While he was laying there, he said he needed a blanket. The ABC workbook was the best I could do without leaving that section of the store,” Chris said.

Alex reportedly closed his eyes and covered up with the book and pretended to be sleeping.

“He stayed that way until another mom came down the aisle, she laughed and applauded my ability to get my son to lay down calmly in the toy aisle,” Chris told us.

Ultimately, Alex was up and playing against, and even had a rare nighttime trip to the playground near their home before he actually went to bed.